WELL SHYANG MACHINERY CO., LTD. (WSM) was established since 1975. The Company has committed on religions of “Quality is First”, “Excelsior”, “Customer Satisfaction” and “Innovative R&D”. As a professional manufacturer to produce various type of Kneader Mixer, Extruder and Pellet Making Machine that widely applied in different industries i.e. rubber, silicone, plastics, coating, adhesive and compound material, our sales network spread over the world.


The company has been served for 40 years of organization. Devoted itself on the product innovation and customer service, warmly obtained all the customers’ reliance & support. WSM has gained multi-national Patents for Hydraulic kneader mixer, Intermeshing rotor Kneading Mixer, leak-proof oil seal, automatic oil supply system and so on. All products are certificated CE Safety norms as well as EMC Test.

Throughout the advance consultation to the aftermarket service, WSM are always provided the customers with the optimum products, technical consultation, equipment layout, prompt customer service and the employee’s training to the customers. What we are concerned the customer requirement & satisfaction as principle, one step and one stair is its spirits, steadily foot on Taiwan and then advance towards the world. WSM is the most reliable partner to your business!


WSM was founded in the 1970s. The earliest company was named " San I Steel Works " and later changed its name to " Hsin Wan Machinery Works ". In order to expand its service to customers, we established " Well Shyang Machinery Co., Ltd." and the current chairman is Mr. Chang Wan I. The company has been served for three generations of organization. Devoted itself on the product innovation and customer service, warmly obtained all the customers’ reliance & support.

WSM has long been committed to the improvement and development of machine quality;
In 2000, Wellshyang developed the oil-hydraulic kneader mixer and obtained patents in many countries. In 2004, it successfully developed intermeshing rotor Kneading Mixer, becoming the second manufacturer in Asia to manufacture this type of machine after Kobe Steel in Japan.
In addition, Wellshyang also holds a number of patents, such as leak-proof oil seal for extruder, automatic oil supply system, etc. With more than 40 patents, we are the most patented rubber and plastic machinery manufacturer in the Asian industry.


1998”
- Introduced Japanese technology and capital, set up the board of directors
- Reorganized and referred Mr. Wan-I Chang as the present position

2003”
- Purchased 2,500 square meters land in Heping Road, YongKang Dist, and began to build the own factory.

2004”
- Due to business expansion required, rent third factory in Tainan city
- Invested 200,000 US dollars and successfully developed the intermeshing rotor kneading mixer in 2 years, becoming the first company in Taiwan and the second company in Asia to own this technology

2005”
- The new factory in Yongkang Dist was completed in May.
Second and third factory was closed, first factory turn into a warehouse

2006”
- Obtained the International Standards ISO9001&CE certification
- In pursuit of stable quality, decided to use Sumitomo reducer to all products

2008”
- Promoted the concept of environmental protection and obtained ISO14001 certification

2010”
- Commissioned by Japanese company and developed the TYR series extruder successfully, became the first company in Taiwan to own this manufacturing technology 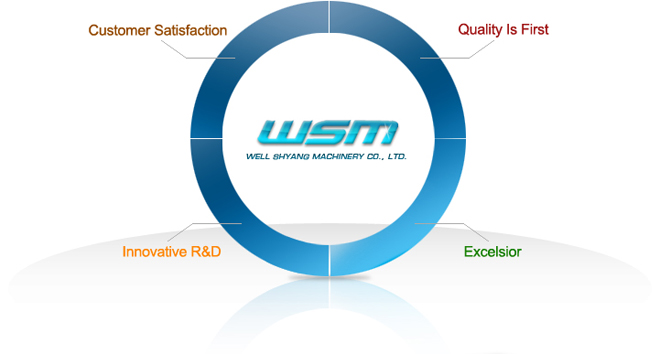